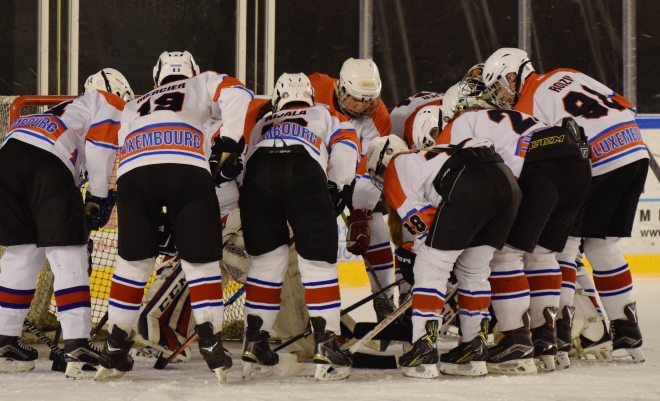 The U17's season ended with a great effort in Mullhouse on Sunday.

In the first period both teams showed a desire to win as every player fought for the puck. After the first 20 minutes the game was 1-1, thanks to Niklas leading the Huskies to the first goal. It was a poweplay goal after a period of strong dominance.

The Huskies came out with a solid effort in the 2nd period and advanced the game leading 2-1 on a goal from Mikael assisted by Jeremy. Unfortunately 5 minutes later we were playing 3 against 5 and our adversaries were using the extra space and created a combination of passes that resulted into a beautiful goal. 5 minutes later Mulhouse forward managed to shoot from harmless looking 1 to 1 attack. The shot was accurate and landed to the corner of the goal. So despite a good effort by Rob and the rest of our defenders we fell behind in the 2nd period by 3-2.

Like the rest of the season the U17's came out in the 3rd period determine to compete. Despite our effort and many chances, we struggled to score. It looked like we were paying interest for playing 12 players against 22. Mullhouse however, got some lucky goals as we ended the game 6-2 after a dark period of less than 5 minutes costed us 3 goals. Congratulations to Mikael, Jeremy, Romain, Aleks, Reuben, Tony, Arthur, Jacques, Rob, Lauren, Niklas and Hilmir on your effort today. We were really proud of you: the season ended the Huskies way: fighting until the last moment.

Thanks for all your effort and support this season.